Campus drama is a highly professional literary and artistic activity. The creation and polishing of the script of the drama requires a high level of literary accomplishment, the performance of the drama requires performing arts, practicing sounds and movements, and the beauty of dancing needs to grasp the stage shape, lighting, sound, props, etc. Performing a good play is not easy. The instructor instructs students to shoot a good play, which is much more difficult than usual classroom teaching. In order to do a professional annual drama performance, the professional also hires experts from provincial radio stations, provincial cultural centers, and theaters as instructors each year to provide professional guidance on script creation, adaptation, performance rehearsal and stage performances.

Ma Ying, a broadcasting and hosting professional of 2019, said that from backing lines to slowly understanding the character's personality, to entering the role, changing mood at any time. Acting in a drama, with high requirements for thinking, literacy, lines, and physical training, gaining more than the previous two years of learning, but also eliminating tension, enhancing self-confidence, and has a comprehensive ability in broadcasting and hosting Great promotion.

The school's broadcasting and hosting professional rehearsed for the first time in 2019 the classic drama "Secret Love of Peach Blossom" directed by the famous Taiwanese director Lai Shengchuan. Although it took six months, the students of this major have gained a lot from the play and became popular on campus, causing a sensation Students urged two extra performances. At this point, the rehearsal of the drama before graduation has become a traditional project. Today, the campus classic drama has been rehearsed for four consecutive years, becoming a beautiful scenery of the campus culture at the end of the year.

Wu Changyou, president of the Changjiang Vocational College, said that through stage works that are popular and popular on campus, students are guided to think about society and history with the core values of socialism. It has played an important role in the spiritual world and the enhancement of young people's spiritual strength, which has effectively enhanced the overall spiritual outlook and cultural taste of the campus.

Director of Broadcasting and Hosting Professional Teaching and Research Office Zhao Yan said that by rehearsing and interpreting classic dramas and dialogue drama works, students can improve students 'social cognition and ideological level, and they can also develop students' awareness of teamwork through team participation in creation and performance. , Innovation and creativity, personal interpersonal communication skills, self-confidence. For the past four years, students in the major of Broadcasting and Hosting have used their semester time to rehearse classic dramas, as well as rehearsal classics.

China Education News Network (correspondent He Zhiwu Liu Zhao) After six months of careful rehearsal by teachers and students, the Yangtze Vocational College's 2019 year-end broadcast and hosted a professional year-end drama, a classic drama report performance, which was staged at the school on the evening of the 26th. The scene was packed, winning applause from time to time.

The unique charm of campus classic dramas inspires the mind, purifies the mind, and infects and nurtures college students in a subtle way. It activates the campus cultural atmosphere and improves the taste and quality of campus culture. Therefore, Changjiang Vocational College's annual classic drama performance has become a topic of concern to teachers and students throughout the school. By the end of the year, everyone is asking about the performance time and eager to watch it. 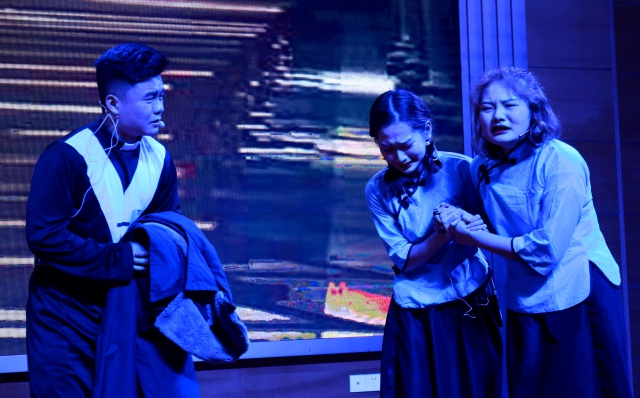 Liu Lin, a 2019-level e-commerce major at the school, said that freshman knew that the broadcast drama was very exciting, and it was difficult to get a ticket. This year, as an interview with a college student reporter, I finally had the opportunity to watch it live. I feel the drama is very immersive, very shocking, it is wonderful!

A group of "post-95s" far from the flames of the war, tonight, they played the original drama "Starfire" on the theme of the War of Resistance Against Japan, combined with classic episodes of the drama "Tea House", the movie "Jinling Thirteen Tale", and "Chocolate Opera Trick" A gift to the 70th anniversary of the founding of the People's Republic of China. Allowing the audience to clenched their fists without knowing it, and immediately tightened their nerves because of their excitement. Their acting skills and comprehension conquered the teachers and students at the scene, and the wonderfully deductive drama was right to the hearts of the people.

Previous post: 12 ministries and joint posts ! By the end of 2022, schools of all levels and at all levels will launch student mental health services